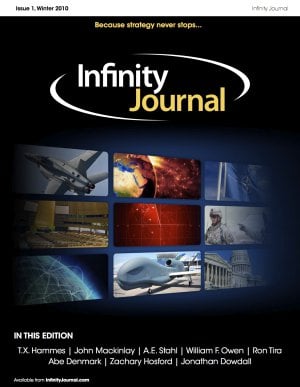 Former Marine Colonel T.X. Hammes holds that without knowing the underlying assumptions, decision makers cannot evaluate proposed strategies. As assumptions are rarely mentioned, decision makers must demand they be clearly stated as part of any discussion.

The End of a Strategy-free Decision Making Environment?

Have Europeans lost the habit of thinking strategically? John Mackinlay thinks they have, but their increasing disinclination to act in concert with the U.S. may force them to regain it.

Precisely what are targeted killings and are they effective? In this article, A.E. Stahl and William F. Owen argue that in the right context and with a coherent policy in play, there is plenty of room for success for this strategy.

In this article, Ron Tira questions if Israel has a strategy and how to confront one of its main challenges: the build-up of Iranian proxy missile forces on Israel’s northern and southern borders. Tira suggests that the answer is negative, but then again that Israel’s realistic options are limited anyway.

Lynchpin: The U.S.-ROK Alliance after the Cheonan

After a North Korean naval attack killed 46 South Korean sailors, where does the U.S.-ROK alliance go from here? Abe Denmark and Zack Hosford see a new era unfolding, but both Washington and Seoul have their work cut out for them.

Strategic Culture: A Look at Europe

Does strategic thinking have a universal logic, or is it culturally defined? Jonathan Dowdall explores the concept of “strategic culture” in Europe, and argues that when it comes to strategy, history is everything.