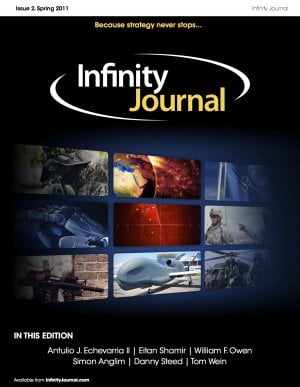 The Uncommitted Commitment: US Military Involvement in Libya

In this article, Ron Tira argues that the American military's involvement in Libya is conducted in contravention of American strategic doctrines; and it is an odd pick when contrasted with other more significant challenges to American vital interests in the region.

In this article, Dr Antulio Echevarria reconsiders Clausewitz’s analogy of war’s logic and grammar. Although it is often used to support normative arguments regarding war’s subordination to policy, Echevarria holds that it also has some limited utility with regard to contemporary strategy debates, particularly the COIN controversy.

In this article, Eitan Shamir investigates the various approaches utilized by both the American and Israeli militaries in dealing with nonstate actors, namely the different groups and organizations in Iraq, Afghanistan, Lebanon and Gaza.

Seek and Destroy: The Forgotten Strategy for Countering Armed Rebellion

William F. Owen argues that as insurgencies are violent armed rebellions, defeating them via military force is the measure from which all other success flows.

Simon Anglim argues that despite many of the claims made against them in ‘informed’ literature, Special Forces are a major strategic asset, provided they are used properly.

Cyber Power and Strategy - So What?

The Cyber realm has been the subject of intense debate and speculation for many years now, but still lacking is a genuine strategic appraisal of what Cyber Power can offer to the strategist. Danny Steed proposes a basic framework intended to open a wider and more genuine strategic discussion of this ever more important realm.

The 'narrative strategy': A politicized strategy for leaving Afghanistan

What’s left for NATO in Afghanistan? Tom Wein examines the remaining options, and concludes that NATO must construct a narrative for Western publics, if it is to avoid ignominy and boost security.