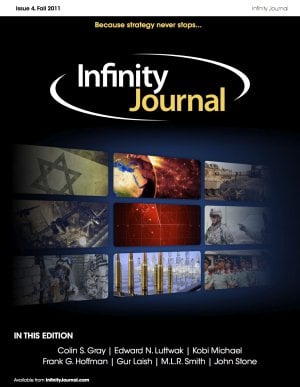 Success in Libya will not come through betraying our principles

Colin Gray argues that there is sufficient continuity amid the change in strategic history for us to be confident that the 21st will be yet another bloody century — as usual.

In this article, Edward N. Luttwak argues that China’s advance towards becoming the next global power is doubtful, though not impossible. Despite its attempts at military advancement and its increasing economic power, China’s provocative transition from “rule-taking” to “rule-making”, among a slew of other issues, hinders the country’s rise to great power status.

In this article, Professor Kobi Michael analyzes the difficulties that Israel’s political echelon faces in complex strategic situations by exercising the paradoxical logic of strategy. Adding to that difficulty is the complex and turbulent environment in which Israel operates, where it faces a fundamental clash between military strategy and political logic.

Frank Hoffman extends his own interpretation of the hybrid threat construct, and examines its strategic utility and implications in the context of four contending schools inside the U.S. defense establishment, which are competing in the post-Operation Enduring Freedom and Iraqi Freedom environment.

In this article, Gur Laish argues that a strategic assessment of the 2006 Lebanon War should begin with an understanding the two sides’ strategies. Although at times obscure and not predetermined, Israeli strategy proved stronger and prevailed through many tactical shortcomings, resulting in years of quiet along Israel’s northern border.

The word strategy is an over-used and much misunderstood term. M.L.R. Smith and John Stone show how strategic theory should be conceived as an analytical method. In the process they demonstrate how strategic theory offers a mind-opening and intellectually liberating path that is able to clarify complexity.