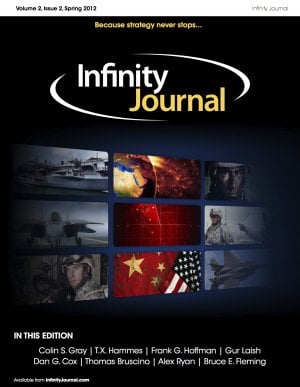 Strategy: Some Notes for a User’s Guide

Strategy is a ‘high concept’ that nearly everyone claims to value. However, in this Infinity Journal Feature Article, Colin Gray explains why strategy’s nominal popularity typically is celebrated in its attempted application by a host of potentially disabling difficulties.

As the United States “pivots toward Asia,” it must develop a military strategy for potential conflict with China. In this article, T. X. Hammes argues that the Pentagon must look beyond the Air-Sea Battle concept and develop a workable strategy.

The Myth of the Post-Power Projection Era

Is the United States about to lose one critical component of its unparalleled strategic freedom of action? Frank Hoffman, a U.S. defense analyst, argues that the increased reach and lethality of emerging anti-access and area denial threats do not diminish the strategic utility for amphibious power projection capabilities.

In this article, Col. (Ret) Gur Laish analyzes both Israeli and Hamas strategy pertaining to the conflict in the Gaza Strip. Laish explains why a steady state of ongoing, low-intensity conflict has formed. He further indicates that Hamas’ strategy does not constitute an existential threat to Israel, since it contains a built-in limitation: excessive “success” will cause it to fail (the Amorite Iniquity Effect).

Why Hybrid Warfare is Tactics Not Strategy: A Rejoinder to “Future Threats and Strategic Thinking”

This article critiques the concept of hybrid threat as an example of a telling individual case of a larger problem of muddled thinking present in contemporary discussions of future warfare and strategy.

Departing from the usual view of military strategy as limited to practical “how-to”s, Bruce Fleming suggests that a military’s understanding of itself - its sense of what it is and what it does in relation to the civilian society it defends - has profound effects on its ability to achieve its goals. With the benefit to their societies of Western militaries’ increasingly murky engagements in question, the military gets less of the whole-hearted support from civilians it enjoyed in the last century. The result is that it becomes resentful towards the civilian society it is meant to defend. Military morale drops, and effectiveness suffers. A more accurate understanding by the military of its current role could solve this problem.