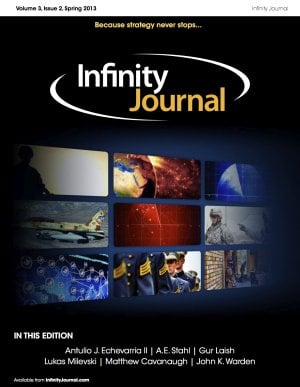 Over the last thirty-five years, strategic culture has become a popular and influential concept. In this article, Antulio J. Echevarria II argues that proponents of the concept have never truly reconciled its inherent tensions.

In this article, A.E. Stahl briefly examines Hamas’ centers of gravity (CoG), as defined by Carl von Clausewitz, during the 2000-2005 Second Palestinian Armed Rebellion. It questions, among others, where Hamas’ CoGs resided and whether they were immune from or susceptible to military force, or whether such centers were even worth the cost of striking them. Stahl holds that during the armed rebellion, there were four possible CoGs. He concludes, however briefly, with an understanding that Hamas’ CoG was most likely their armed force. However, this was one CoG that Israel either could not or chose not to destroy.

Six months after Operation “Pillar of Defense” – the most recent military clash in the Gaza Strip – Colonel (Res) Gur Laish takes a fresh look at the strategic status between Israel and the Palestinians. Laish writes on the heels of one of his most recent articles published in Infinity Journal, “The Iniquity of the Amorites” (April 2012). This new perspective validates the conclusions in his April 2012 article and demonstrates the fact that Hamas’ Strategy, when it exceeds Israel’s limit, brings about a massive Israeli military retaliation. As rocket fire from Gaza has since dwindled, what may be occurring is a change in Hamas’ Strategy.

Strategy and Cyberpower: From Tactics to Politics

Strategy is the activity of converting tactical action into political effect, but there are relatively few works in strategic studies which explicitly examine the dynamics and pressures of this ‘currency conversion.’ This is even more true in the literature on cyberpower, where the strategic and policy, and technical and tactical literatures are divorced. This article aims to examine briefly the relationship between tactics, strategy, and politics in the realm of independent cyberpower, concluding that the non-linear character of the relationship between tactics and politics means that tactics may move beyond merely enabling or limiting strategy to the point that tactical feasibility may become apolitical in consequence.

Should strategy be required in junior officer education? Even at an institute such as West Point, it is not, where recently an officer-faculty member remarked, “We don’t want second lieutenant strategic thinkers [in the United States Army].” Matthew Cavanaugh argues that basic strategic knowledge is fundamental to two critical junior officer requirements: building morale and military adaptability.

Was Obama’s 2009 Afghanistan Surge Based on Sound Strategy?

In this article, John K. Warden analyzes the strategic rationale behind President Barack Obama’s decision to surge 30,000 additional troops to Afghanistan in December 2009. He concludes that the surge was disconnected from appropriate US interests and unlikely to achieve long-term results.