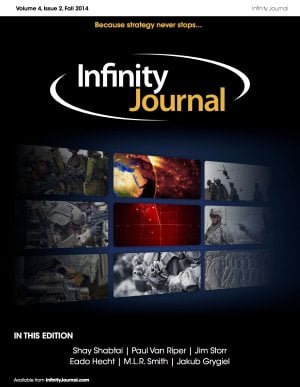 Israel has to adjust its policy, strategy, conduct and use of force to the changing nature of the world. A significant tool in conducting these adjustments is a thorough review of Israel’s national strategy, its National Security Doctrine, and its national security.

From Grand Strategy to Operational Design: Getting it Right

This article describes how the US national security community lost its ability after World War II to develop and implement grand strategy successfully. The author offers four principles as a sound foundation for a presidential statement enabling creation of a grand strategy with enduring qualities. He argues also that the US military should replace current bureaucratic approaches to campaign and operational planning with discourse and systemic thinking.

This article looks at the relationship between warfare and strategy. It discusses definitions and practice. Its findings do not reflect well on much strategy writing.

Defeat Mechanisms: The Rationale Behind the Strategy

War is a violent contest between the rivals’ material and will. Defeat Mechanisms are the processes that cause the physical and the psychological damage that drive armies to defeat. They describe the theoretical rationale behind the operational plan. This article offers a taxonomy and a theory for the various Defeat Mechanisms and the relationship between them as a basis for conscious decision-making when planning a war, a campaign or a battle.

Politics and Passion: The Neglected Mainspring of War

The presumption that politics performs a restraining and controlling influence in war is embedded in liberal ideas of war to such an extent that it often obscures the energy that gives war its underlying motivation, which is passion. The consequence of ignoring this reality is a lack of direction in strategic formulation and a loss of will to act where it might be prudent.

The return of ancient challenges

The current and future security landscape is more akin to that of pre-modern, rather than modern, history. Characterized by the proliferation of lethality and a plethora of strategic actors, the international arena will see prolonged and widespread, albeit low-intensity, violence along unstable frontiers. Effective use of force will require political preparation of the battlefield, through co-optation and division of the enemy, but it will rarely be decisive. As in the past, in the future states will have to prepare for recurrent counter-raids to mitigate threats to their security.