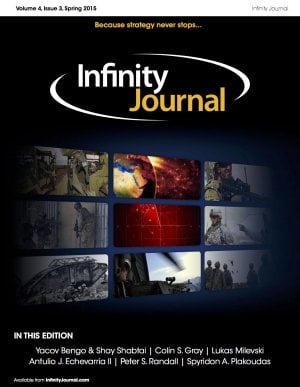 The Post Operational Level Age: How to Properly Maintain the Interface between Policy, Strategy, and Tactics in Current Military Challenges

In the present environment and with the military problems it currently faces, conceptualizing of the Operational Level as a central component in methods of command, the structure of headquarters and processes of operational planning, creates more difficulties and failures than it does advantages. It may actually be said to have become an impediment to the process required. The best response to the current military challenges is direct contact between the political, the strategic and the tactical.

Strategy is about security, and it is always made in a political process. The theory for strategy takes two forms, general (and eternal) and for the military instruments particular to time and place. Strategy always must be done tactically and operationally. A primary challenge is the need to achieve the strategic effect necessary for political success.

Strategy and the Intervening Concept of Operational Art

Strategy and Arms Races: The Case of the Great War

This article argues the arms race before 1914 was driven by the military strategies of deterrence and coercion; as such, it was as much a tool of policy as the actual use of force in wartime. The case of the Great War suggests arms races do not in themselves cause wars; rather it is the strategies driving them that matter.

Strategy and the role of the enemy

It is easy for the strategist to overlook the role that the enemy plays in strategy, yet to do so compromises how effective strategy can be. The enemy is not only a definitional necessity for strategy, but also must be considered with regards the ends, ways and means of strategy. The intelligent strategist must also consider the enemy, not only as an obstacle to be overcome, but something to learn from.

This article studies the incidence of mass violence against non-combatants during a counter-insurgency campaign and investigates how and why this practice can (under specific circumstances) prove useful for a government in the campaign to suppress an insurgency.