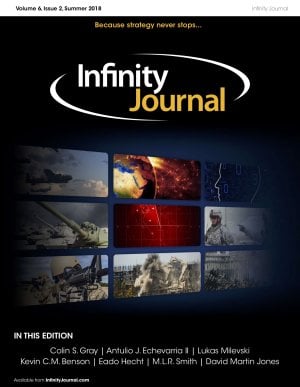 "... there is not, has not been, and never could be any historical experience that owed nothing to its strategic context."

On Schelling and the Fallacy of Positive Doctrines

Scholars have long been aware of some of the shortcomings of Thomas Schelling’s principal theories. But they have not come to terms with what those flaws mean for strategic theory in general. This article discusses how appreciating the faults in Schelling’s theories of bargaining and coercion can improve contemporary strategic thinking.

Choosing to practice strategy is a deliberate act, one which has inherent meaning in the context of the overall political relationship among adversaries. To choose strategy implies the existence of political interests which the responsible decision-makers believe to be incompatible with the other party, and which may only be unraveled through the use of force. Upon initiation, war is thus perceived as a zero-sum situation among enemies and it is the role of strategy to compel the opponent to revise his perspective. Successful strategy is ultimately self-negating, in that it creates a mutual situation in which it is no longer required.

It Is Our Fault: “No Overarching Strategy”

Regarding the use of Special Forces in Africa senior officers indicate there is a leadership problem because there is no overarching strategy. If there is no “overarching strategy” this is because the officer corps collectively accepted this condition, this lack is our own fault. This article proposes a model for the development of strategy and how to address the lack of strategy.

War on the Northern Front

A future war between Israel, Hezbollah and its patron Iran will very likely be a medium to high intensity war. Hezbollah's strategy will aim to achieve psychological exhaustion of Israel's population by a massive long range artillery bombardment and a shallow invasion of Israel's border areas. Israel's responding strategy will very likely aim to achieve a rapid destruction of Hezbollah personnel and material from the air and on the ground.

What Carl Might Have Said About Terrorism: How Strategic Theory can Enlighten an Essentially Contested Debate

Contemporary discussions about terrorism are subject to endless distortions that render the term of doubtful analytical utility. However, the application of strategic theory can rescue the word from concept stretching and the constant attempt to occlude a tactical practice with moral judgements, and thereby restore its explanatory value. By asking what Carl von Clausewitz would have made of all the fuss about terrorism, this study reveals a number of fallacies that frequently encumber both popular and academic discourse. In so doing, a Clausewitzian sense of scepticism suggests that the first and most important of all intellectual tasks is the attempt to use language carefully and to apply the principles of parsimony and falsifiability.