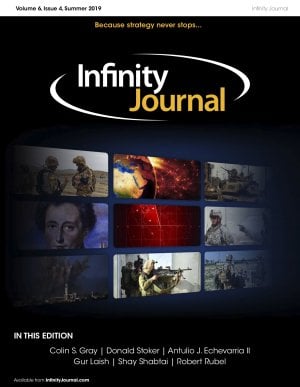 Why Strategy is Different

The key difference about strategy is the fact that it cannot be taught and learnt in a classroom. It is not a body of knowledge. Strategic skill is either an inherited characteristic or is learned from experience.

A Typology of Insurgency and Counterinsurgency

Too often the literature on insurgency and counterinsurgency dwells upon the tactical issues involved while overlooking the core differences in insurgencies as well as the key strategic factors that must be controlled to mount an effective insurrection as well as to defeat one. This article provides a simple typology for understanding and assessing insurgencies, identifies the most important factors combatants should seek to control, and shows why these matter.

When the Clausewitzian Trinity is Not Paradoxical

This article discusses the implications of not viewing the famous Clausewitzian trinity as paradoxical. Most Clausewitz scholars understand the adjective "paradoxical" was never used in the original German text. But they can still find it difficult to avoid thinking about it that way.

Why Israel and Hamas Fail to Achieve a Strategic Change

Why are Israel and Hamas each failing to achieve their goals, vis-à-vis each other, by use of force? Israel has a superior military force, yet Israel fails to stop Hamas’s violence. Hamas finds the political and socio-economic situation in Gaza impossible, and yet, with all its rockets and other means of violence it cannot force Israel to end its blockade. This article argues that this failure is not the product of poor leadership but the result of a dynamic, which occurs in many protracted low intensity conflicts. This dynamic seems to "lock" both sides in a deficient equilibrium that can only be changed by large-scale military operations or a diplomatic agreement. All attempts to change the situation by adding some pressure on the other have failed. A better understanding of the dynamic of protracted low intensity conflict can result in a more efficient strategy.

War, Cognitive Biases and Perception Management: The Time Has Come

Warfighting is fundamentally a human activity, and therefore it is susceptible to cognitive biases. Western armies should include these biases in their conduct of war, and expand perception manipulation.

Antecedents to Strategy: The Use of Force

The possession of a particular source of strength could produce a strategic decision-making pathology in which strategists' perception of the situation is distorted. The author leverages his experience in wargaming to illustrate the potential danger and discusses its potential effects in the areas of deterrence and operational planning.