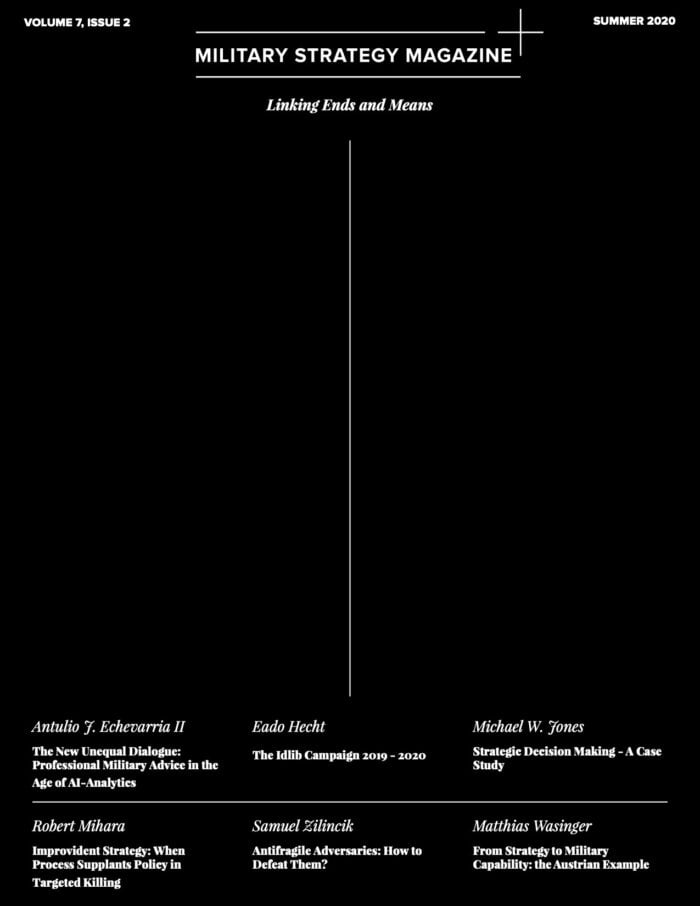 The New Unequal Dialogue: Professional Military Advice in the Age of AI-Analytics

This article speculates about the way analytics enhanced with artificial intelligence might affect civil-military relations, specifically the dialogue between civilian policymakers and military practitioners over strategic courses of action. AI-enhanced analytics could well tilt the balance of this “unequal dialogue” in favor of the military. To prevent that from happening, strategic theorists need to begin thinking about the problem now, because the pace of AI is moving too quickly to wait.

Though the Syrian Civil War smolders on, to date the last major campaign in that war was the Syrian Regime's offensive in the Idlib province from early 2019 until March 2020. In this offensive, Regime forces captured more than 40 percent of the last major territorial holding of Rebel forces. Only Turkish intervention prevented the Regime from taking more. The article compares the rival strategies, operations, and tactics in that campaign.

This article examines how military officers can use history as a tool to develop strategic decision making. Put simply, strategy is a blueprint of how military forces will be used to achieve the government’s policy objective. Historical strategies were those chosen from an array of options available at the time. Comparing the chosen strategy to alternative options helps modern practitioners of war develop analytical skills that can be applied to future conflicts.

Targeted killing can be a suitable strategy, but it is always a bad strategy. Routinizing the nomination of persons as targets, over time, erodes the supremacy of policy relative to imperatives that are merely technocratic or tactical. The routine embeds a presumption of rationality and relevance in the strategy that is independent of actual policy interests, subverting the proper subordination of strategy to policy.

Antifragile Adversaries: How to Defeat Them?

Most typologies of adversaries in Strategic Studies do not help us understand strategic practice. Accordingly, this article develops a new typology, rooted in the adversary's response to strategic performance. The article focuses on the adversaries who get stronger when engaged in violent interaction and explains the logic of defeating them. The new typology can explain strategic practice across strategic history, as well as in contemporary and future wars.

From Strategy to Military Capability: the Austrian Example

Although not always recognized by the vast majority of a nation's population, there is a direct link between the National Security Strategy and the required military capabilities. A strategy itself never explains a requirement in detail. It defines an end state, outlines objectives, describes ways, and sometimes even means. It sets the frame for further planning of the nation's instruments of power.