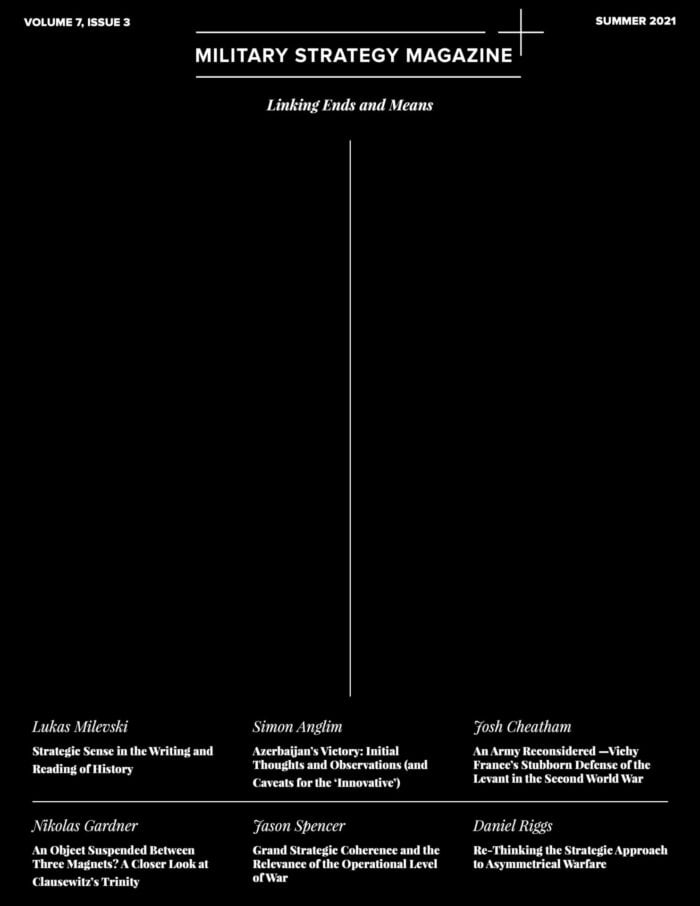 Strategic Sense in the Writing and Reading of History

Strategic sense may be developed by studying history. Yet little has been written about whether or not history or, more particularly, the writing of history, is itself strategically sensible. Historical styles of writing may make it more difficult to develop strategic sense; strategists have to be wary of the historical efficiency with which history is often written. The strategist must critically and contextually engage with the history, by connecting and comparing it to other relevant knowledge, to draw out more from it than the historian has written.

Azerbaijan’s Victory: Initial Thoughts and Observations (and Caveats for the ‘Innovative’)

Autumn 2020 saw the Republic of Azerbaijan win a decisive military victory over ethnic Armenian forces holding the disputed territory of Nagorno-Karabakh and the surrounding areas, regaining much of the territory they lost in the Azerbaijan-'Armenia war of the 1990s by using conventional land power to pursue long-standing strategic aims. Much has been made of Azerbaijan's use of Turkish-supplied unmanned combat aerial vehicles and while they played a part, other factors mattered too.

How is it that the army best known for crumbling in 1940 was able to defend two foreign capitals—Beirut and Damascus—for several weeks during an Allied attack launched out of Palestine just a year later? This article explores key factors that allowed (Vichy) France’s ‘Army of the Levant’ to generate greater military effectiveness against the Allies than the main French Army was able to against the German Wehrmacht a year earlier.

An Object Suspended Between Three Magnets? A Closer Look at Clausewitz’s Trinity

This article examines Clausewitz’s trinity in light of recent scholarship on the role of emotion in the conduct of statecraft and war. This scholarship does not diminish the value of the trinity as a metaphor for the nature of war. But it does illuminate patterns in the interaction of the tendencies that comprise the trinity. Understanding these patterns can only enhance its value as an explanatory tool for scholars and practitioners.

The US military's current orientation towards Asymmetric Warfare has been deleterious to military operations over the last few decades. The strategic emphasis towards developing and spending on reactive capabilities while ignoring the development of pro-active strategies has created unseen consequences that has hindered success and punished the US populace. The following examines the unseen consequences of this strategy and advocates for a reconsideration of asymmetric strategy based on understanding systemic tensions and Carl Menger's conception of value as a means to navigate an asymmetric environment.