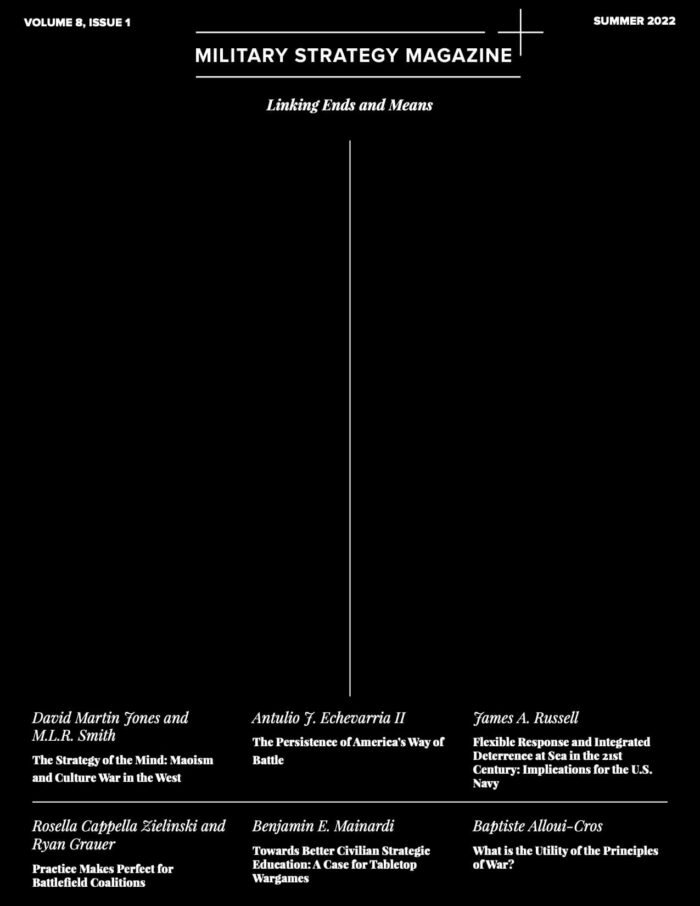 The Strategy of the Mind: Maoism and Culture War in the West

The Maoist conception of the political realm possesses an enduring, but little explored, influence upon the contemporary practice of politics in the West, especially in the manifestation of what is often termed the ‘culture war’. Mao’s thinking about how to perfect the revolutionary persona through the cultivation and purification of the mind presents several challenges to established Western ideas of the strategic realm.

The Persistence of America’s Way of Battle

This article revisits an argument made almost two decades ago which called for the US Army to revise its way of thinking about war. Instead of seeing wars as battles writ large, the US Army—as the chief US proponent for land operations—needed to update its doctrine to emphasize not just winning battles, but how to convert battlefield outcomes into policy successes. Some modest progress has been achieved since the original argument was made, but more work remains.

Flexible Response and Integrated Deterrence at Sea in the 21st Century: Implications for the U.S. Navy

This paper explores the relationship between Integrated Deterrence and Flexible Response from the perspective of the U.S. Navy. The paper argues that the Navy needs to reacquaint itself with Cold War-era strategic theory in order to properly address the demands of 21st century Integrated Deterrence.

Belligerents in war often form battlefield coalitions, deploying their forces to fight side-by-side in battle, in the hope of increasing their chances of military victory and strategic success. Not all battlefield coalitions are created equal, however. Battlefield coalitions in which partner forces have not recently fought together in combat often struggle to cohere and perform effectively. Strategists should accordingly plan for significant inefficiencies when going to war alongside unfamiliar partners.

Towards Better Civilian Strategic Education: A Case for Tabletop Wargames

While wargaming as a professional tool has experienced a much-needed resurgence in the past few decades, its value as an experiential learning tool remains underutilized. This is especially so in the case of civilian students aspiring to national security careers whose training at universities comes overwhelmingly from theoretical approaches. Wargames offer the opportunity to train the minds of would-be national security practitioners by simulating real-world military campaigns, international crises, and more, assisting the next generation of strategists.

What is the Utility of the Principles of War?

Strategic thought has been endowed with an abundant literature on principles of war. Their influence largely permeates the making of military doctrines and our perception of war, and yet, no consensus has ever been reached on what exactly constitutes them, or why they are useful. This article explores why we still produce principles of war, what they are for, and under which conditions they can actually be useful to the strategist.