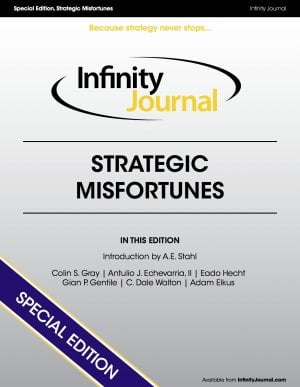 An Introduction to Strategic Misfortunes

Clipping the Eagle’s Wings: Explaining Failure and Success in the Battle of Britain, 1940

The Luftwaffe’s failure in the summer of 1940 was the direct result of the excellence of RAF Fighter Command, rather than because of its own mistakes, serious though these were. In this Infinity Journal Special Edition article, Colin Gray explains the strategic nature of the German defeat.

Antulio Echevarria argues that Rommel’s generalship continuously pushed men and materiel to their limits, which precipitously wore down forces that were merely intended to provide security and stability along the flank of the main theater of operations against the Soviet Union. Rommel failed to appreciate the operational interplay between land power and air power – and his forces paid the price at El Alamein.

Adaptation of Israel’s successful strategy to quell Palestinian attacks emanating from neighbouring Arab states to the unique circumstances of Lebanon led to the First Lebanon War in 1982. However, after initial success, it failed.

The Accidental Coindinista: A Historian’s Journey Back From the Dark Side of Social Science

Gian Gentile provides a self-critical assessment of how he came to violate the dictates of being a good historian: he began to think like a social scientist and embraced a model that placed the primacy of strategy over tactics in war. What he found, however, is that history doesn’t always conform to that model.

Vietnam and After: Failure in the Vietnam War and the Enduring Defects in US Strategic Culture

C. Dale Walton examines US decisions regarding war and peace from the Vietnam War to the present. He finds a disturbing pattern of “anti-Clausewitzian” behavior. Walton argues that the US military is very good at fighting wars, but America’s civilian leaders frequently have misused their military instrument, engaging in ill-conceived adventures without first carefully assessing likely human, financial, and other costs, establishing clear goals, and crafting a realistic roadmap for winning the conflict in a timely fashion.

Strategy and the Chinese Civil War

The sheer scale and complexity of the Chinese Civil War belies assertions that today’s substate conflicts are uniquely challenging. Adam Elkus looks at what lessons we can grasp from the complexity and contingency of Mao’s victory and the Nationalists’ strategic misfortune.