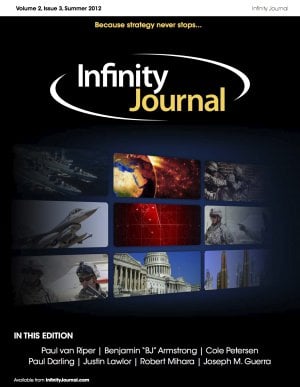 The Foundation of Strategic Thinking

Lt. Gen (Ret) Paul van Riper contends that national leaders and defense officials need to understand how nonlinear systems work if they are to implement military strategy effectively, especially as they seek to tie tactical actions to strategic goals through operational design.

Living in a Mahanian World

While strategists continue to study the work of Clausewitz and Sun Tzu the work of Alfred Thayer Mahan has fallen out of favor in recent decades. This article demonstrates why a century after the death of the inventor of American grand strategy, the works of Mahan and consideration of the maritime elements of grand strategy are relevant as ever before.

Clearing the Air - Taking Manoeuvre and Attrition Out of Strategy

Should strategy be concerned with attrition and manouevre? In this article, Cole F. Petersen revisits the attrition/manoeuvre debate and argues for clarity in strategic terminology.

Married to Clausewitz but Sleeping With Jomini: How Operational Concepts Masquerade as Strategy, and Why They Must

Fault for America’s lack of strategy and the high cost that it entails lies not in the halls of the Pentagon but rather at the feet of its political masters.

Beyond Future Threats: A Business Alternative to Threat-based Strategic Planning

Do future threats really matter? In this article, Robert Mihara asserts that many landpower experts have overstated the significance of future threats for determining the future of the U.S. Army and argues that business theory offers a better basis for institutional strategic planning.

An Introduction to Clausewitzian Strategic Theory: General Theory, Strategy, and their Relevance for Today