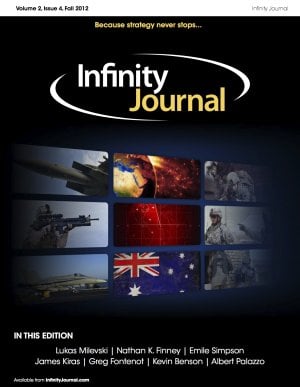 Can strategic effect be predicted; and how? Lukas Milevski examines the ends-ways-means trinity and identifies the strategist’s means as the basis of predictability in strategy, although all aspects of the trinity have their own role to play.

Air-Sea Battle as a Military Contribution to Strategy Development

A large degree of the discussion on the United States’ focus on the Asia-Pacific has conflated Air-Sea Battle with strategy. In this article Nathan Finney argues that Air-Sea battle and its associated concepts are in reality merely the military’s contribution to strategy development; a starting point in the negotiation.

Conventional strategic thought during the Cold War posited the maintenance, in liberal democracies, of a clear boundary between ‘policy’ and ‘operations’: policy makers should stay out of operational decisions; conversely, policy’s executors should stay out of policy making. In this article, Emile Simpson challenges the endurance of this orthodoxy in the context of contemporary conflict.

Special Operations and Strategies of Attrition

Way of War or the Latest “Fad”? A critique of AirSea Battle

In this article, Greg Fontenot and Kevin Benson argue that AirSea Battle, the US Navy and Air Force’s proposed concept for a 21st century way of war is necessary but insufficient. What is needed, given the conditions of our times, is a combination strategy and concept that will serve as the framework for the design of campaigns that ensure the United States and its allies freedom of navigation of the global commons.

The Making of Strategy and the Junior Coalition Partner: Australia and the 2003 Iraq War

The Iraq War was a departure for Australia. For the first time Australia did not meekly accept a senior coalition partner’s strategy but articulated its own, which it then pursued and achieved. In this article, Dr. Albert Palazzo identifies the factors that led to this success.