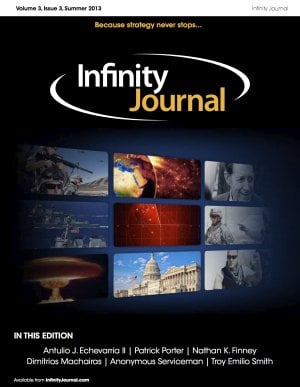 Does War Have its Own Logic After All?

Clausewitz famously said war has its own grammar, but not its own logic. Yet, eminent scholars and military practitioners have argued that war tends to create a veritable logic of its own, one that displaces the rationale of diplomacy with operational or tactical imperatives. Antulio Echevarria explores that issue through the historical example of the United States in the Second World War.

The Weinberger Doctrine: A Celebration

The Weinberger Doctrine was laid down almost 30 years ago to guide the use of American force. It has become deeply unfashionable. Yet it offers a wise alternative path to the imprudent liberal crusading of our time. Contrary to the rhetoric of its critics, war for the United States is almost always a choice, not a necessity. America’s military power remains valuable even when it is only rarely used. And the greatest challenge for statecraft is not widening the scope for war but its limitation.

Using the Threat of Violence to Contain Syria: An External Approach

The U.S. has relied heavily upon the use of force over the last decade to achieve its goals, overlooking the equally effective role of the threat of violence. This is particularly the case in foreign policy issues that are of only marginal national interests, such as the ongoing conflict in Syria. In this article, Nathan K. Finney postulates that the U.S. should pursue a policy of containment, supported by a strategy of coercion by denial that leverages the threat of violence. This would deter adversaries and assure allies in the region, while ultimately creating a stalemate between the belligerent parties, exhausting all involved.

Why Did the US Adopt the Strategy of Massive Retaliation?

Massive retaliation, a landmark in strategic history, was the cornerstone of the US’s response to the significantly challenging international security environment that had gradually emerged in the early 1950s. In this article, Dimitrios Machairas analyses the underlying parameters that informed the new doctrine, and highlights the multicausal character of strategic decision-making, showing how, in this case, the imperative for efficient deterrence combined with a set of individual-, state-, and system-level factors to prompt the adoption of the strategy of massive retaliation.

A Response to ‘Voices From the Field: Towards a Successful Outcome in Afghanistan’

The Coalition’s current Afghanistan effort is ending and policymakers will determine if further military action or plans are necessary past 2014. NATO and the US have one last chance to get this right or continue with the same failed thinking and Centre of Gravity analyses that have arguably not achieved strategic objectives to date. Getting this mission analysis wrong by following “bridging strategy” advice and a counterproductive “better war” myth risks the very strategic goals that tie NATO and the US to Afghanistan in the first place. In this article the author argues that this framework must change, and it must change immediately.

When Should Covert Action Be Used in Fulfillment of Foreign Policy Strategy?