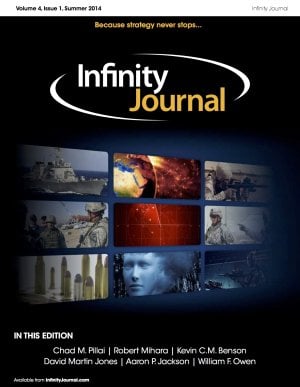 Balanced Deterrence for the Asia-Pacific Region

The Balanced-Deterrence Strategy is intended to provide a framework that engages China as a rising power in the region while providing the U.S. and its Allies and partners the means to deter militarism over resource and territorial disputes. Its objective seeks to make the unpredictability of war less desirable than the greater political-economic integration options available.

Strategy Malpractice and the False Hope of Experts

Strategy at the theater-level highlights the institutional tension that exists between functional experts, offering answers to pressing tactical problems, and strategists seeking to ensure the strategy bridge between battlefield effects and policy aims is maintained. This article examines this tension and calls for strategists to recognize its consequence for their militaries and the national interest.

Do Something: A model for the development of 21st Century Strategy

Tactics without strategy is the noise before defeat. The strategist is obligated to provide the framework through which tactical success is firmly linked to achieving policy and strategic objectives. Strategy must articulate the way in which we use engagements to the end of attaining the object of the war or use of force. Professional officers must develop the ability to render politically aware military advice.

Politics, Statecraft and the art of War

David Martin Jones demonstrates that early modern thinking concerning war and statecraft of a realist or reason of state provenance was acutely aware of the moral and political consequences of the use of force. Thinkers following Machiavelli sought to address questions of the use of force on a practical case-by-case basis, and contemporary leaders of western democracies could learn much from their counsel.

This article revisits Thomas Kuhn’s conceptualisation of “paradigm” and discusses its applicability to strategy. Although strategists always employ paradigms, this is often a subconscious process. Developing a better understanding of paradigms will enable strategists to more effectively evaluate the nature of strategic theories and assess their validity or otherwise.

Strategy Is For The Bad Guys: Why Modern Pop Culture Struggles to Understand Ends and Means

In this article, William F. Owen illustrates how popular culture’s demonstration and understanding of strategy is deeply flawed. For Owen, forms of popular storytelling have a quite superficial view of serious issues regarding the use of force, so much so that they exercise a less-than-useful influence on what many have come to understand about strategy.