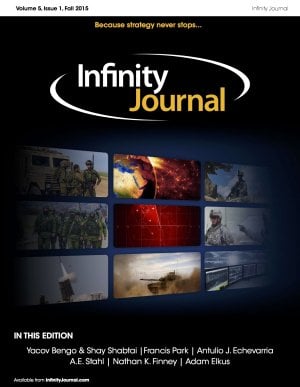 To achieve the optimal connection between policy, strategy and tactics (described in part 1) through an operational focus approach that connects the strategic value to the combat worth (described in part 2), a new kind of situational assessment is required. The staffs, from brigade to General Staff level, should include two separate groups: a Planning Group and a C2 Group. We believe the uncertainty hovering over the utility of military force in achieving the national goals makes this new structure crucial for the effective application of that force.

A Framework for Developing Military Strategists

How Should We Think about “Gray-Zone” Wars?

Written from the perspective of Israeli military strategy, this article is an analysis of Operation ‘Pillar of Defense’, an eight-day war fought between Israeli forces and Palestinian combatants in Gaza in 2012. The analysis focuses on asking and answering the following questions: How does Israel view Hamas in the Gaza Strip? What was the policy, and what was the strategy employed to gain it? What can others learn from Israeli political and military behavior regarding violent irregulars? By utilizing information derived from interviews with Israeli government and military officials, as well as news archives, answering these questions is the aim of this analysis.

Land Power: More than Simply the Element of Decision

When a political decision requires a more enduring answer, land power will likely be the main element of national power employed. Such use of large amounts of men and women in campaigns of physical control are not the only use for land power, however; it can also accomplish tasks through three other approaches to the use of force — assurance, deterrence and coercion — to create strategic effect.

Strategic Theory and the Logic of Computational Modeling