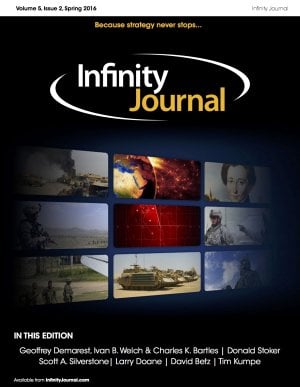 This article expounds on the distance to the ‘culminating point’ -- that theoretical point in space and time beyond which it is imprudent to continue any military activity. The authors outline the significance to rational strategy-making of correctly measuring such strategic distances.

What’s in a Name? Clausewitz’s Search to Define “Strategy”

Like many other military theorists before and after him, Carl von Clausewitz struggled to define “strategy.” His long effort culminated in the definition offered in On War.

Haunted by the Preventive War Paradox

Interest in preventive war as a strategy to neutralize the potential threat posed by rising powers has surged in recent decades, particularly in response to fears of future aggression by states such as Iraq, Iran, and North Korea. The logic of preventive war, however, suffers from serious strategic flaws that are not widely recognized. This article examines these flaws through the perspective of German Chancellor Otto von Bismarck, who remains the most important critic of preventive war among major world leaders.

Civil wars and insurgencies are exacerbated and prolonged by the presence of lootable wealth. This wealth can take many forms, from blood diamonds to drugs to oil. Access to this wealth allowed the FARC to struggle against the Colombian government for decades, yet attempts to eradicate coca fields from the air only made the problem worse. Similarly, an air-centric campaign against ISIL focused on dismantling their illicit oil infrastructure may prove ineffective as well.

The Strategic Bystander: On Mayhem in Century 21

This paper takes as its starting point the now two-decade old notion of the ‘strategic corporal’. It argues that the contemporary strategic reality is not as it was once envisaged, wherein Western soldiers at the lowest ranks in expeditionary ’small wars' might cause profound strategic effects (for good or ill) through actions at the tactical level amplified by a ubiquitous global media. It is rather one in which the enemies of Western civilization produce outsized results by directly engaging populations ‘at home’ with symbolic violence of their own.

Drawing on Chinese discourse, this article presents a comparative analysis of General André Beaufre and Sun Tzu and thereby sheds light on their joint importance in current affairs. The paper argues that serious Beaufre scholarship might enhance our understanding of China's grand strategy and how the PRC operates at various hierarchical levels of strategy.