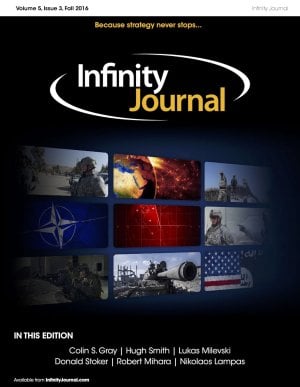 Dr. Colin S. Gray is Professor Emeritus of Strategic Studies at the University of Reading, UK. He has served as an advisor to major political parties both in the USA and UK. Currently he is writing a book on Theory of Strategy for Oxford University Press.

This article examines some of Clausewitz’s methodology in On War. In most cases he divides phenomena into two distinct forms in theory while observing how they interact or intermingle in reality. His three-fold distinctions, beginning with the ‘remarkable trinity’ of reason, passion and chance, are more complex. A way of linking three of his central trinities is suggested. In Clausewitz’s hands essentially simple methods yield a highly sophisticated analysis of war.

Problems of Strategy in Wars of Honor

Fear, honor, and interest remain among the preferred identifiable motives among strategists for which polities go to war, but less frequently do strategists study how these motives—particularly honor—actually influence the actual practice of strategy. Yet honor may have a significant influence on strategic practice. Polities have gone to war in the name of their own honor, often in the form of geopolitical credibility. This same honor, however, may often inhibit strategic performance by preventing strategists from exploiting opportunities or putting military pressure upon the enemy beyond a certain threshold. The result is that such wars may not end in favor of the honorable. This is a concern which is of contemporary relevance to NATO, as any potential war in defense of the Baltic states would be a war of geopolitical and alliance credibility—of honor.

What’s in a Name II: “Total War” and Other Terms that Mean Nothing

The term “Total War” is bandied about in discussions of many different conflicts, often as a catchall explanation, and generally without definition. Its imprecision makes it a source of confusion in much military-related writing, and thus useless for anything other than certain narrow theoretical discussions of warfare. This essay explains why.

The Inutility of Force

The forever wars in Afghanistan, Iraq, and Syria illustrate the importance of understanding the complexity of legitimacy and its causal influence over the feasibility of pursuing policy aims through violence. This article examines the consequence individual conceptions of legitimacy have in determining where militarizing policy fails and where patience and soft power succeed.

How the United States Policy-Makers View the Threat of the Islamic State of Iraq and the Levant (ISIL)?