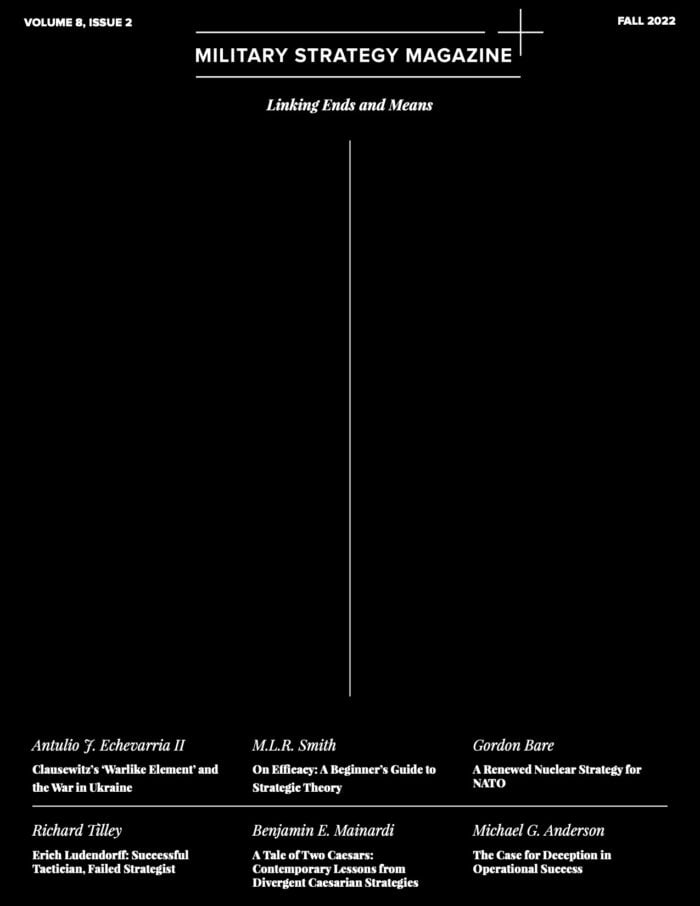 Clausewitz’s ‘Warlike Element’ and the War in Ukraine

This article explores Clausewitz’s use of the “warlike” element in relation to the war in Ukraine. The warlike element helps us understand how war’s nature, not just its character, can change, particularly with regard to wars of national liberation.

On Efficacy: A Beginner’s Guide to Strategic Theory

Strategy is a popular but frequently misunderstood and mis-used term. When broken down to its fundamental however, the term strategy is all about the attempt to be effective. What this entails in practice is more complicated than it sounds. The principles of strategic theory can, though, help us reach some provisional conclusions about what it means to be efficacious.

A Renewed Nuclear Strategy for NATO

Russian aggression in Ukraine and its nuclear threats have called into question the American security guarantee which underpins global stability and the international non-proliferation regime. NATO needs to revive its flexible response strategy and the United States needs to deploy intermediate range theatre nuclear forces forward to its new members.

Though World War I is often characterized as a conflict lacking warfighting ingenuity and innovation, German General Erich Ludendorff presents an interesting dichotomy of master tactician but failed strategist. Though he pioneered highly successful offensive and defensive techniques during the waning years of the war, Ludendorff proved incapable of turning battlefield success into strategic victories. In Ludendorff, historians are offered a case study in discerning tactics and strategy that transcends the Great War and can be applied to wars and warfighters from the dawn of armed conflict.

Applied history holds many perils and rewards for its practitioners. Russia’s recent invasion of Ukraine has been a particular focal point for the misapplication of a variety of historical precedents. This article seeks to balance some of the misconceptions surrounding possible paths towards war termination through examining the relationship between narratives and the conduct of war. By revisiting two of military history's greatest and most ancient narrative works, there are useful, albeit grim, implications for the Russo-Ukrainian War that can illuminate the rationale behind possible directions the course of the conflict may take.

The Case for Deception in Operational Success

Through an examination of the extensive history of military deception, a look at its place in theory and doctrine, a strong case exists for its crucial role in operational success. The critical role of military deception is even more prevalent in modern and future conflict within a rapid and expansively saturated information environment, though difficult to achieve. United States Army doctrine must be more inclusive of deception, less in the shadows, and considered for addition to the core doctrinal precepts.