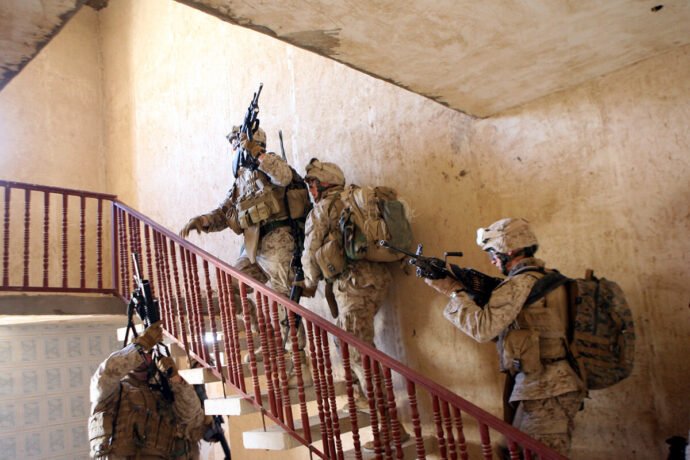 Disclaimer: The views and opinions expressed or implied are those of the author and should not be construed as carrying the official sanction of the U.S. Department of Defense, U.S. Air Force, or other agencies or departments of the U.S. government.

—Dr. Emmett L. Brown, Back to the Future

Today, Western militaries consult doctrine, craft objectives, and measure means to impose clarity upon complexity. Their strategists praise clear context like the unambiguous purpose of Operations Desert Shield, Desert Storm, and Desert Farewell.[i] Unsurprisingly, US policymakers attribute the 1991 campaign’s success to such clarity.[ii] And the sentiment reverberates in current US national strategic guidance: “military force should only be used when the objectives and mission are clear.”[iii] But this view acclimates strategists and policymakers to expect certainty from military options. Certainty is untenable when the international system’s ambiguity accelerates nation-state volatility.[iv] Today’s complexity necessitates a more adaptable approach to clarity, one which also embraces the uncertainty of a “world in flux.”[v]

Classical physics describes “flux” as the electromagnetic flow through a three-dimensional object. Electrical current passes through the object’s height, width, and length over time, the fourth dimension. In military strategy, flux is a notional term about contextual fluidity. A nation’s depth, breadth, and span change and are changed by the international system’s choices, cognition, and consequences over time. Fortuitously, science fiction offers a pertinent tool to conceptualize flow and change: the flux capacitor. In the Back to the Future film series, the flux capacitor allows one to manipulate time by interacting with the flow of history. Accordingly, a conceptual flux capacitor allows a military strategist to manipulate time by framing system interactions within the flow of history. Artful strategy changes flux by exploiting and exploring system variation to create advantage.[vi] Therefore, a conceptual flux capacitor helps the military strategist think in four dimensions and adapt to the twenty-first century flux of choices, cognition, and consequences.

Contextual flux in military strategy is not about a system changing but about the value of the change. The current global security landscape defines valuable change as forging and extending strategic advantage.[vii] This means operations are strategy’s tools to manipulate context beyond the finite space and compressed time of operations themselves.[viii] Four-dimensional thinking is a way to consider the creation of strategic advantage more explicitly for operational planning. The four conceptual dimensions for a military resemble the height, width, length, and time of physics. “Height” is depth in echelons and alliances, “width” is breadth in jointness and domains, and “length” is span in whole-of-nation capability. “Time” or flux exists in the dynamism and ambiguity of change across these dimensions.

Concerning depth, echeloned formations create flexible options. Size gradations empower operational adaptation akin to the Napoleonic-era innovation of semiautonomous corps.[ix] Alliances and diplomacy expand this adaptability. Mutual defense treaties, offensive aid agreements, and neutrality preservation pacts appreciably control uncertainty by shaping geopolitical decision-making.[x] Military breadth leverages this depth with unique service expertise and jointness. The branches of a military form additive wholes for cross-domain successes, much like the capture of Vicksburg in the American Civil War[xi] or the amphibious assault on Inchon in the Korean War.[xii] In the twenty-first century, a military’s whole extends to multi-domain effects too. For instance, the US Army’s “Multi-Domain Operations” concept seeks advantages across domains to seize and sustain the initiative, expand the competitive space, and credibly demonstrate capability.[xiii]

Still, it takes an entire nation to grow the span of a military’s depth and breadth over time. The United States demonstrated this in World War Two when industrial production and logistical distribution advantages converged to expand capability.[xiv] Today, span also includes reconciling authorities and effects across real and virtual spaces.[xv] Length further extends into economic and informational spheres of influence, making whole-of-nation considerations more expansive. Fortunately, thinkers like Carl von Clausewitz, John Boyd, and Venkatesh Rao offer compelling ideas to appreciate flux across all three dimensions. Respectively, they identify key system variations within war, warfare, and narrative. By thinking fourth-dimensionally about their ideas, strategists can imagine “outside the box” and ponder how flux affects depth, breadth, and span to create advantage (Figure 1). 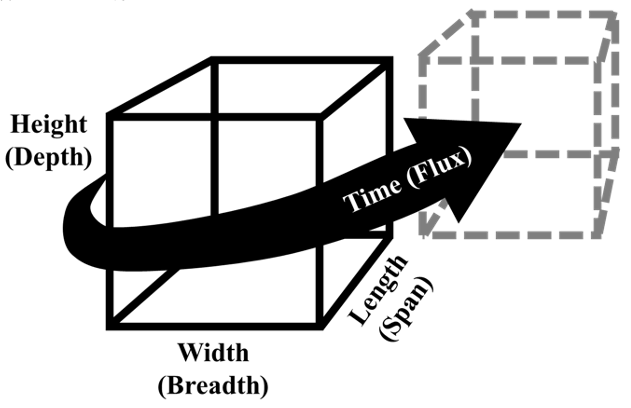 Clausewitz offers an enduring description for flux in war. He posits a “paradoxical trinity” best captures the fluctuations of state-level conflict where war is a constant interplay of passion, reason, and chance. For Clausewitz, the flux of war allows leaders to exploit the dynamic yet discontinuous interaction of peoples, governments, and militaries. This understanding originated from Prussia’s decisive defeat in 1806 at Jena-Auerstädt.[xvi] Exploiting Prussia’s rigid structures and doctrine, Napoleon Bonaparte disintegrated Prussian armies by emphasizing reaction to uncertainty rather than trying to control it.[xvii] Clausewitz shows the four-dimensional thinker how war is about interaction and perceiving states in flux.

Regarding warfare, Boyd outlines how speed affects military coherence and sense-making. He argues advantage comes from action where warfare is responsive activity across moral, mental, and physical dimensions. In essence, he saw Clausewitz’s uncertainty as leverage over an adversary. For Boyd, the flux of warfare allows faster and more fluid militaries to gain asymmetric advantages. This understanding came from voluminous study framed by Nazi Germany’s multi-dimensional maneuver warfare. Plans succeed by magnifying ambiguity and exploiting systemic chaos.[xviii] Boyd shows the four-dimensional thinker how warfare is about fast transients when adapting to uncertainty with states in flux.

Linking war and warfare together, Rao believes narrative structures their meaning. He proposes planning is a subjective act of reasoning where narrative combines the emotion of peoples, the rhythm of decision-making, and the energy of patterns. Rao thus reveals the flux of narrative is rational yet interpretative, a process of planners enacting strategic perceptions.[xix] This mirrors lessons from the 1973 Arab-Israeli conflict. Initial Israeli hesitancy to adjust after Egypt and Syria’s early invasion successes was a product of poor perception and worse enactment.[xx] Rao shows the four-dimensional thinker how narrative is about epistemologies which anticipate and operationalize a state’s flux.

For operational art to remain practicable as a cognitive approach in creating advantage,[xxi] strategists must better appreciate flux across war, warfare, and narrative. Clausewitz reveals war’s flux requires a quick recognition of truth to overcome uncertainty, not a narrow pursuit of clear context.[xxii] Additively, Boyd recognizes warfare’s flux requires adaptation to disrupt enemy perceptions, not slow searching for certainty.[xxiii] Finally, Rao asserts narrative’s flux requires a sense of momentum and context-switching, not a dogmatic set of beliefs to impose clarity.[xxiv] Combining these considerations together, a conceptual flux capacitor emerges to create contextual advantage. This context exists at the intersection of choice, cognition, and consequence.

Clausewitz’s passion, Boyd’s moral dimension, and Rao’s sense of emotion structure a logic for choice. For states in flux, choice is a nation’s agency and capacity to affect the international system.[xxv] By recognizing national character in decisions, strategists better consider how feelings and behaviors guide a state’s volition. Further combining Clausewitz’s reason, Boyd’s mental dimension, and Rao’s description of rhythm yields a better understanding of cognition. In a disordered world, cognizance is the convergence or divergence of truth and knowing within a system.[xxvi] By elevating ontological thought, strategists better contemplate their perceptions and those of other states. Finally, the combination of Clausewitz’s chance, Boyd’s physical dimension, and Rao’s discussion of energy outlines the importance of consequence. Outcomes have significance based on what they mean to others, not just those acting.[xxvii] By embracing uncertainty in meaning, strategists better examine holistic effects from a system’s changes.

Taken together, each thinker’s ideas cohere flux for military strategies in space and time. Expressed as flux capacitors, one can begin to apprehend how war, warfare, and narrative affect context for nation-states. Critically, Clausewitz, Boyd, and Rao do not argue for balance. Rather, they focus on the interactional flux of their subordinate considerations over time. Advantage comes from manipulating and adapting to these interactions so operations stay relevant under uncertainty.[xxviii] Therefore, a flux capacitor for choice, cognition, and consequence shapes and cultivates a deeper sense of a changing world.[xxix] Appreciating flux means thinking fourth-dimensionally about tomorrow’s advantages to craft better strategies today (Figure 2). 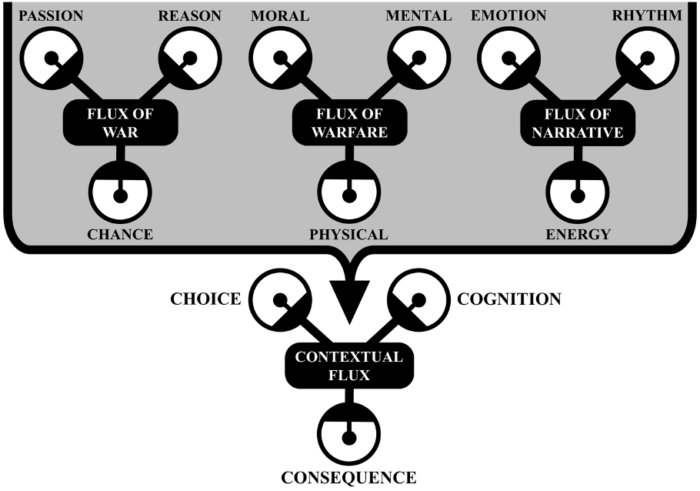 The global context of 1991 did not require four-dimensional thought. The United States had 161 days to mobilize for war as the Soviet Union dissolved and China retreated following the Tiananmen Square Massacre. Consequently, the U.S. military enjoyed the aberration of an already advantageous context. But this means the campaign to liberate Kuwait was not a clarion call for clarity to bring military success.[xxx] America is unlikely to find another enemy willing to fight a war away from US shores or another world so willing to accept US strategy and purpose.

Clear context is not a military’s norm nor should it be a policymaker’s goal for a world in flux. Twenty-first century military strategy is about thinking fourth-dimensionally to appreciate an unclear and uncertain context. Future strategies must leverage this system complexity as a catalyst to create advantage. A capable strategist only needs a conceptual means to consider time, a contextual flux capacitor. The implication for Western militaries is to become more mindful of nation-state flux and the flow of history beyond the confines of an operation. In science fiction, the flux capacitor makes flow conceivable. In military strategy, understanding states of flux makes advantage imaginable. 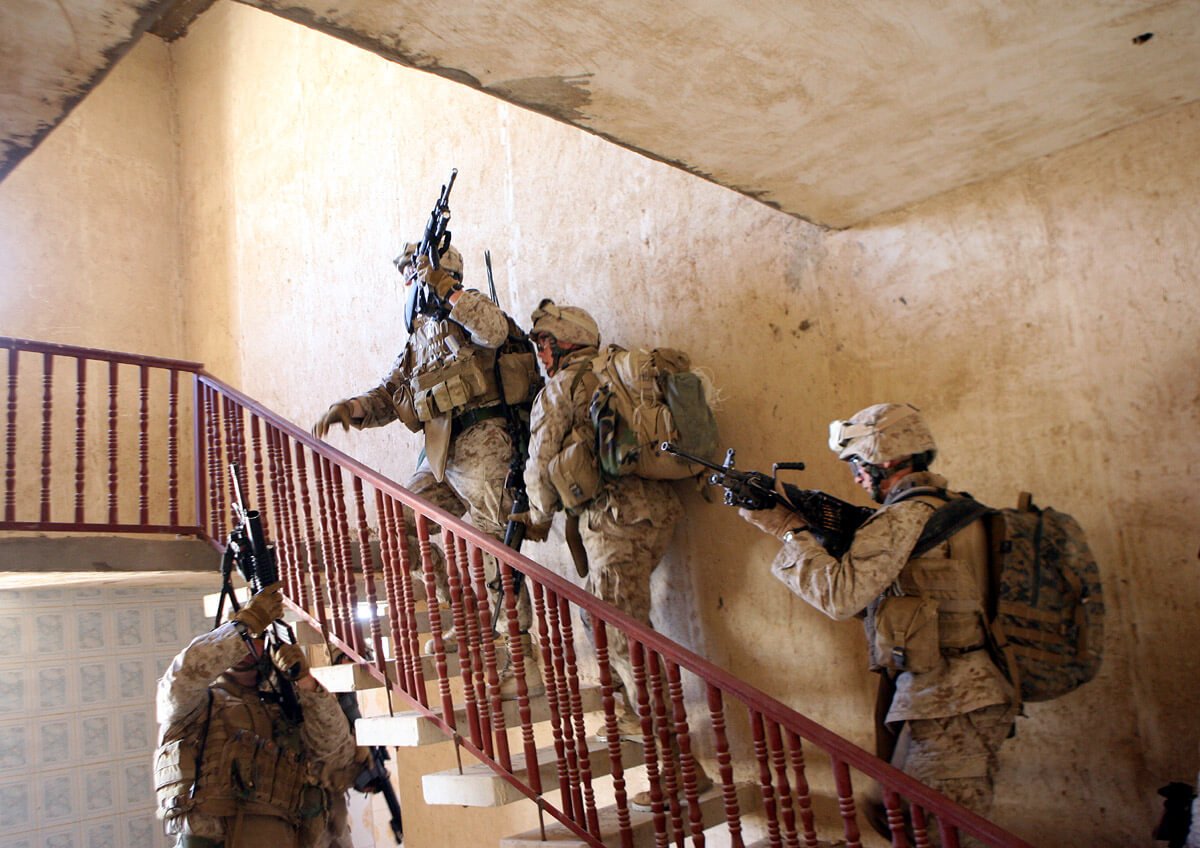