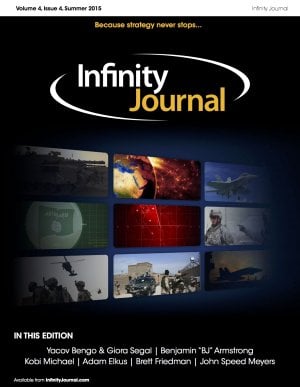 Through three concepts: ‘Operational Focus Approach’, ‘Combat Worth’ And ‘Strategic Value’ the authors explain what is needed to be done in order to maximize the utility of force in contemporary military operations. This article is Part Two of an analysis of the post-operational level age.

D - All of The Above: Connecting 21st Century Naval Doctrine to Strategy

Debate over the operational concept Air-Sea Battle/JAM-GC has tended to dominate naval strategic discussion of the past several years. Despite the amount that has been written on the subject, very little has engaged with the actual theory and classical concepts of naval strategy. A better understanding of where today’s naval discourse fits within the ideals of classical naval strategy will not only help us better understand the proposals and counter-proposals, but it will also help strategists to better evaluate and develop future thinking.

Strategy as a Learning Process: Israel and the United States Against Islamic Terrorism

Islamic terrorism poses a novel challenge that disrupts the ability of western statesmen and military commanders to design a coherent and relevant grand strategy because of the complexity of the phenomenon; the military and the statesmen are required to conduct complex learning and diagnostic processes to properly interpret the operational environment, analyze the relevance of political goals and military courses of action and adjust them accordingly, to design a strategy. This article develops the concept of Discourse Space (open and closed), identifying the correlation between strategic learning and the Open Discourse Space and identifying the conditions required to create it.

Coming Down from Olympus: A Call for Normative, Descriptive, and Phenomenological Distinctions in Strategic Theory

In strategy, we often fail to differentiate what ought to be, what will be, and what we ought to know. Failure to differentiate between normative ideals for the crafting of strategy, how we can actually expect strategy to be crafted, and what strategists making strategy ought to know about how to make strategy harms both the practical craft of strategy to accomplish political goals and analytical understanding. This article examines distinctions between what we wish strategy could be, what it often sometimes is, and the classical notion of strategic theory as a body of correct knowledge to aid the strategist in application.

The information age has had a profound effect on the conduct of war. Most view the importance of information in warfare as both new and separate from the violence that characterizes war. It is not. This article describes information warfare and violence as rhetoric in its proper place in strategic theory and as a timeless aspect of warfare.

Will a President Approve Air-Sea Battle? Learning from the 1958 Taiwan Strait Crisis

Strategists have debated whether a U.S. President would authorize Air-Sea Battle, a potential plan for war with China that involves strikes on the mainland. This article examines the 1958 Taiwan Strait Crisis to demonstrate why the president might not authorize such strikes for fear of precipitating a nuclear war. American military officials should therefore strive to create viable war plans that avoid mainland strikes.