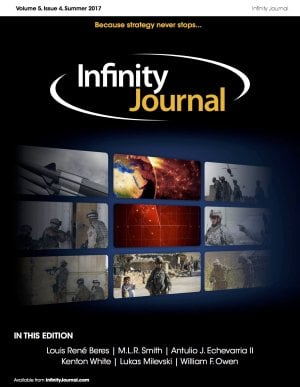 Looking ahead, Israeli military planners will need to be increasingly attentive to the country's nuclear strategy, including reconsiderations of "deliberate ambiguity," and certain corollary questions of preemption, strategic targeting, and ballistic missile defense. Throughout this indispensable assessment, it will be necessary to shape pertinent specific policy changes according to a previous development of coherent doctrine, and to proceed on the core understanding that Israel's nuclear strategy must always remain oriented toward deterrence, rather than actual war-fighting. In the end, as this essay comprehensively points out, the critical strategic policy task for Israel must always be seen as analytic or intellectual, that is, as a protracted struggle of "mind over mind" with many (sometimes interrelated or "hybrid") adversaries.

Why Strategy Is Easy but Difficult (at the Same Time): A Short Study on the Complexities of Escalation

Good strategy is invariably about political communication. It is the elusive and contingent goals of politics, however, that make an appreciation of what constitutes good strategy difficult and challenging. A sometimes-under-appreciated point is that a range of context-dependent and often continuously fluid judgements inevitably makes strategy beyond the theoretical mechanics demanding and problematic.

This article offers an alternative way of understanding Clausewitz’s wondrous trinity. Instead of seeing it as mainly a composite of hostility, chance, and purpose (or irrational, nonrational, and rational) forces, this article suggests Clausewitz purposefully combined the forces and the institutions (people, military, and government) because the trinity is meant to serve as an analytical framework for understanding the nature, or type, of war at hand. Theory’s task then is to use the trinity to assess changes in the conduct of war over time as well as the warlike readiness of the combatants involved in any given war. This interpretation, moreover, accords with, and is a refinement of, the analytical approach Clausewitz employed in the various campaign studies included in the several volumes that make up Vom Kriege, and the importance he gave to analysis in his concept of theory. In sum, the trinity shows us that war’s character and its nature are inseparable, and that changes in the one can affect the other.

In 1982 Professor John J. Mearsheimer wrote a paper entitled, “Why the Soviets Can’t Win Quickly in Europe”. Professor Mearsheimer examined NATO’s strategy and capabilities for defeating a Warsaw Pact attack in West Germany. This article examines the flaws in that analysis using archival documents, and cautions against the problems flawed analyses can have on defence policy in a world becoming less stable and certain by the day.

Can Grand Strategy be Mastered?

Modern Errors in Discussions on Strategy

In this article, Owen suggests that inventing or altering the meaning of the word “Strategy,” away from how Clausewitz defined it has created and perpetuated a wide number of errors which have come to plague modern discussion. This risks trampling sound education in Strategy and can only mislead. To quote Colin Gray, “Strategy is the bridge that relates military power to political purpose”.