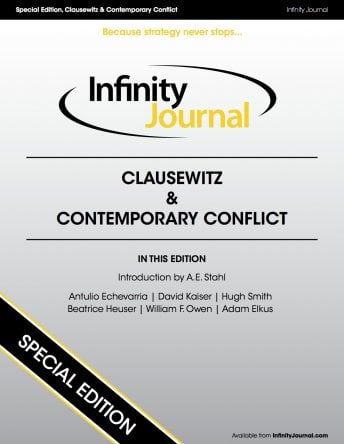 An Introduction to Clausewitz and Contemporary Conflict

In this article, Antulio J. Echevarria II argues that contemporary military doctrine has made the concept of center of gravity the prerequisite for operational art. But the art really lies in knowing when not to use it.

Clausewitz and the First World War

Taking issue with writers who have blamed Clausewitz for the First World War, David Kaiser discusses his influence upon the planning for that war but adds that On War should have enabled statesmen and generals to draw more sensible conclusions after a stalemate developed. He then shows how Clausewitz’s trinity can explain exactly how that war came to an end.

Hugh Smith argues that Clausewitz’s approach to war is imbued at every level with a sociological perspective – from his understanding of the novice soldier going into battle to the impact of social change on the capacity of European nations for war. This sociological dimension, the author suggests, is a major reason for the continuing relevance of Clausewitz’s ideas.

Beatrice Heuser explains that it is just in the question of how ways and means should be related to (larger political) ends that Clausewitz decided not to furnish larger elaborations of the subject. He himself recognised that a conflict might not be decided permanently by a military victory, but did not want to pursue the subject of how to move from the conduct of war to a lasting peace. This means that On War cannot guide us much further on this subject, and rather than cleaving unthinkingly

What does it mean ‘To Be Clausewitzian’? In this article, William F. Owen argues that one must be able to understand the value of Clausewitz’s observations and insights in On War, so that they can be utilized for practical guidance and applied in conjunction with sound judgment. He holds that Clausewitzians do not simply study On War out of academic interest alone. While not excluding other important works on war and warfare, it does mean that they use Clausewitz’s observations as their start point.

The Policy-Strategy Distinction: Clausewitz and The Chimera of Modern Strategic Thought

Adam Elkus explains Clausewitz’s distinction between policy and strategy and argues for its signal importance in 21st century strategy. It’s not just semantics: knowledge and proper application of Clausewitz’s ideas about policy and strategy can help military analysts think better about today’s security problems, while a poor understanding of the policy-strategy distinction can produce conceptual confusion.