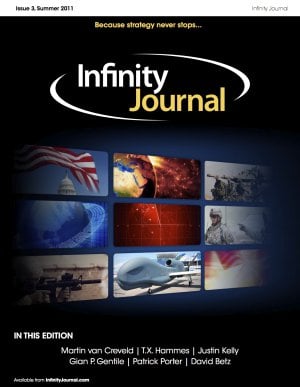 France in Libya: A Strategic Perspective on Opération Harmattan

In this IJ Exclusive, Olivier Schmitt argues that French military actions are based on a flawed strategy, namely an unclear definition of the goals of the campaign, which prevents more efficient use of limited military means.

The Second Lebanon War: A Re-assessment

Contrary to the usual view, the so-called Second Lebanon War was a great victory for Israel. In this article, Martin van Creveld explains why.

Limited means strategy: What to do when the cupboard is bare

The United States has shown a marked tendency to start all strategic discussion by defining the ends and ways it wishes to achieve. It has assumed the means will be available. Political reluctance to commit significant forces and the fiscal crisis mean the United States should start with the limited resources it will have available and then determine what goals can be accomplished.

Justin Kelly questions whether the processes we usually rely on to generate theories and doctrines are logically sound. He concludes that many of the categories we use to order knowledge are, at best, problematic.

The Death of American Strategy

Gian P. Gentile argues that the tactics and methods of counterinsurgency have eclipsed strategy in Afghanistan, and have stifled intellectual rigor and creative thinking in the American Army.

Isolationist heresies: strategy and the curse of slogans

Patrick Porter argues that the term ‘isolationist’ damages strategic debate. It makes it harder to argue for a rebalancing of ends and means in U.S. statecraft, and presents Americans with a false choice between global hegemony and retreat.

‘Cyberwar’ is not coming

In this article David Betz finds much similarity between today’s talk of decisive ‘cyberwar’ and the overblown claims of the prophets of air power almost a hundred years ago.