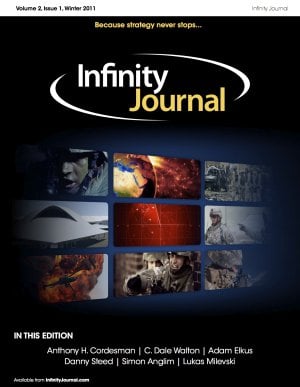 Fiscal Reality and the American Way of War

What is the strategic meaning of America’s military drawdown? In this article, Macgregor explains the rationale for a reduced footprint overseas and the resulting demand for “high lethality/low density forces” in American military power.

In this article, Anthony H. Cordesman argues that the US needs to refocus its strategic planning so that it produces clearly defined force plans, manpower and equipment plans, and projected budgets that the nation can afford. He also argues that strategies should be based on mission areas as defined by the combatant commands and not by service.

The Futile Decade: The US Failure in Afghanistan and Its Lessons

C. Dale Walton argues that the war in Afghanistan has been a failure because the United States’ strategic vision for Afghanistan was flawed from the beginning. Rather than seeking to construct a stable and modern state, US forces should have conducted a grand raid and then promptly been withdrawn from that country.

Covert operations are everywhere in the news, but how do they mesh with strategy? Adam Elkus argues that covert operations have been overlooked by defense analysts, but also have important limitations.

Is There a Future For Targeted Killing?

Targeted Killing is a richly topical as well as controversial subject: will their controversy be their demise? Danny Steed argues that not only does Targeted Killing have a future, but it will be of increasing relevance to strategic practitioners.

Can intelligence transform counterinsurgent strategy, and what would the results look like? Lukas Milevski examines how intelligence can provide the basis for taking control of the pattern of operations in war.

In this article, Dr. Simon Anglim argues that covert activity, which aims to avoid direct military confrontation via indirectness and concealment of both aim and method, is another strategic option beyond those discussed most often in the literature. This has proven a potent strategic method in the past – and if recent events in Libya, the Gulf and Iran are anything to go by, its potency remains in tact.