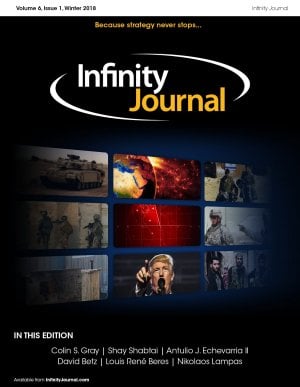 So What! The Meaning of Strategy

All strategy, everywhere and eternally, can only be the product of tactics and operations. Therefore, strategy must be about the consequences of such behaviour, it has no other source.

Intelligence and Strategy: Relationship in Transformation

The information revolution has accelerated the criticality of intelligence to strategic decision-making. It has changed from a Mean to one of the Ways, an integral part of strategy itself. To realize its updated function, intelligence must know, understand, imbue that understanding, influence the decision making, and transform itself at a higher rate and precision than in the past, and by doing so face the evolving nature of uncertainty.

How Sanguine Can We Be about Great-Power War?

This article considers the validity of the primary arguments claiming major wars are relics of the past.  These arguments have become very influential but offer little genuine reason to be sanguine.  Western military establishments have to be prepared for such wars in order to increase the probability of deterring them. Unfortunately, the US military, which should be leading the way on this issue, is quite far behind.

World of Wallcraft: The Contemporary Resurgence of Fortification Strategies

Fortification strategies are resurgent in the contemporary world. Not since pre-Napoleonic days have the precepts of positional warfare, fortification, and siegecraft been so dominant in strategic affairs. The preoccupation in our densely interconnected ‘information age’ with networks, transactional flows, and speed belies the reality that the leitmotif of contemporary security practice—military, civil, and corporate—is infrastructure hardening, stronghold building, and the purposeful channeling of movements of people, goods, and ideas.

Looking ahead, Israel's core decisions on strategy - especially nuclear strategy - must always be based upon a complex model of systemic determinants and prospective synergies. Nonetheless, because the current American president is unschooled in critical matters of world politics, and unpredictable in his analytic capacity to grasp a major ally's orientation to peace and war, Jerusalem could soon need to make unprecedented policy adjustments in dealing with Washington. In essence, the blatantly shallow geopolitical guidance provided to Mr. Trump by General H.R. McMaster is not in any way comparable in utility or conception to the nuanced original insights of Niccolo Machiavelli.

The Threat of “Rogue States” and the Use of Force: The case of the Obama Administration