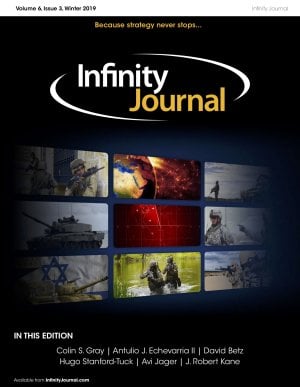 Can Strategy be Taught?

All strategy is made of tactical and operational choice and behavior. Strategy cannot be taught, unlike the tactics and operations from which it must be made.

Strategic Anarchy and the American Way of War*

Scholars have long been aware of some of the shortcomings of Thomas Schelling’s principal theories. But they have not come to terms with what those flaws mean for strategic theory in general. This article discusses how appreciating the faults in Schelling’s theories of bargaining and coercion can improve contemporary strategic thinking.

Teaching Your Enemy to Win

The recent poor performance of the West in the various expeditionary campaigns of the Global war on Terror is often explained as a case of good tactics let down by bad strategy. We argue differently. The situation, in fact, is that our tactics are also poor and strategy is essentially irrelevant because the policy that it is meant to serve is nonsensical. It is bad strategy and poor tactics to engage in conflicts that are doomed to failure from the outset— and immoral to boot. The object of war ought to be the creation of a better peace, for that is all that can justify the violent infliction of death and destruction which is its metier. We, though, go through the motions of war but without conviction or plausible aim. In the process we teach our most highly motivated enemies a thousand tactical lessons and one gigantic strategic one: how to win, against us.

The phrase ’no comment policy’ refers to Israel’s unwillingness to claim responsibility for military operations. The primary objective of the policy is to prevent countries and organizations from retaliating against Israel. The policy, which was particularly salient during the years after 2007, achieved its desired outcome. The countries and organizations that Israel was compelled to attack over the years consistently took advantage of Israel’s denial to avoid the necessity to retaliate time and time again.

Operation PBSUCCESS was a covert operation carried out by CIA that deposed the democratically elected Guatemalan President Jacobo Árbenz and ended the Guatemalan Revolution of 1944–1954, installing the military dictatorship of Carlos Castillo Armas. PBSCUCCESS was a success for the U.S. Government in foreign policy with plausible deniability and CIA-mediated action where it demonstrated CIA’s quick and decisive ability to perform covert action like never before.