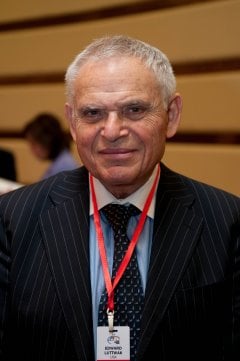 Edward N. Luttwak is an American strategist, author, and security and defense consultant. He received his PhD from the Johns Hopkins University, and he lectures at universities and military colleges both in the United States and abroad. Luttwak is a world-renowned strategist and he is currently a senior associate at the Center for Strategic and International Studies in Washington D.C., a bipartisan foreign policy think-tank. He has also served as a consultant to the U.S. Office of the Secretary of Defense, the U.S. National Security Council, the U.S. Department of State, the U.S. Army, the U.S. Navy, and U.S. Air Force, as well as a number of allied governments and international corporations and financial institutions. Luttwak has testified before several congressional and presidential commissions, including the Senate Foreign Relations Committee in 2007. In 2004, the University of Bath awarded Dr. Luttwak with an honorary degree.

In 2001, one of Luttwak’s seminal works, Strategy: The Logic of War and Peace (originally published in 1987) was enlarged and revised. His latest book is The Rise of China vs. the Logic of Strategy (Harvard, 2011).

Turbo-Capitalism: Winners and Losers in the Global Economy (Harper Perennial, 2000)

Strategy: The Logic of War and Peace (Harvard 2011, revised and enlarged).

The Grand Strategy of the Byzantine Empire (Cambridge, Massachusetts, 2009).

"Why China Will Not Become the Next Global Power… But It Could” (Infinity Journal, 2011)